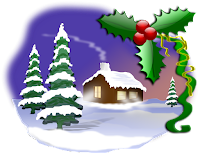 Katy's has once again been busy decorating two Christmas trees with all the Christmas ornaments she's collected over the years -- more ornaments than will fit on a single tree. Like many other singers, Katy and I are both been looking forward to the December 10th gathering of the Shiloh Singers to celebrate completion of another year of singing Sacred Harp music and munching on Christmas cookies and other delights at the 1:30 P.M. singing in the Shiloh Museum's General Store in Springdale. This is the usual short December reminder.

The usual early arrivals will gather at the Springdale AQ Chicken House only a few blocks from the museum around noon. Just ask for directions to the singers at the front desk and they'll point you in the right directions. All singers and their guests are invited.

You are also invited to bring a few extra Christmas cookies, apple cider or a few slices of fruitcake to go with the coffee during the break or after the singing.

I'm sure you've all been concerned regarding Bill Caldwell's recovery. He was even included on a shut-in list in Alabama and had a song dedicated to Bill at a California singing. In Bill's own words:

Doing fairly well.  Just going to therapy, eating well and letting the bones heal at their own pace. ...My physical therapist had to remind me that it's just been six and a half weeks since the accident.  I'm just being human in wanting it to be finished!  But the body heals at it's own rate, not according to my wishes.
Some afternoons I'll call up YouTube on my brother's big screen TV and sing along with the Missouri, Ireland or Texas singers.  Holding out some of those long notes helps with breathing!  Music therapy!
I'd imagine it'll be January before I can sing with everyone again, at the earliest.  That's what I know for now.

I'm sure we'll all rejoice when Bill can sing with us again.

And as a final word, thanks to everyone who contributed to the Shiloh Singers in so many different ways during the past year. It would take all afternoon to list everything and everyone from several states and even then, I'm afraid that with my fading memory I'd leave someone out. Still, thanks are due for adding your voice to our group and for your support to continue the tradition of Sacred Harp singing in the Ozarks. Please also add my personal thanks for the emails and pictures which during the year found their way into portions of the newsletter and website. Hope to see you at the December singing!