The roads dried and the sky cleared over Springdale around noon on Sunday, Ten singers braved the weather to sing on January 13th and six were first time visitors. Thanks to everyone who joined us in spite of the cold and winter conditions. I certainly hope everyone enjoyed the singing.

Actually, we started seeing blue sky along the western edge of Arkansas before noon. The temperature was 27 when we left Mountainburg and 27 when we got home late in the afternoon, but in between, it actually turned sunny and warmer in Springdale. The small electric floor heater that I use to warm up the garage or garden shed in winter supplemented the country store's heating and we were warm and comfortable for the singing. One of things I'm learning about Arkansas weather is that no matter what the prediction, stay around for a while and it will change.

There's a new "Contact" section beneath the calendar. You can use that email address for more information about events or to subscribe (or unsubscribe) to the newsletter.

For those who wanted to know more about the Missouri State Sacred Harp Singing Convention on March 9tn and 10th. the St. Louis Shape Note Singers' homepage already has direct links to information about this event.
Saint Louis Shape Note Singers homepage
Map and Directions to St. John's United Church of Christ
Google Map to Area Motels (w/ addresses and phone numbers)
Bring a friend, share a room and share a ride to the Missouri State Convention.

We can talk more about that in February when we'll look forward better weather. Hope to see you next month.
Posted by BR549 at 9:00 PM

Updated: 1/12/13 7:30 P.M. - The Shiloh Singers of NW Arkansas will be singing in the Country Store on the ground of the Shiloh Museum this Sunday, January 13th, at 1:30 P.M. weather permitting. As of early Saturday evening, the much closer look at the weather headed out of Canada has been less optimistic. The 6:00 P.M. weather reports are calling for a "Winter Weather Advisory" with freezing rain Saturday evening with sleet or freezing drizzle after midnight. A low of around 25 degrees and north winds of 10 to 15 mph are expected in Fayetteville and Springdale. Total nighttime ice accumulations of 0.1 to 0.3 of an inch are possible. Decreasing clouds "should" start to clear off during the morning turning sunny before mid-day with a high of 33 degrees. Even so, there's still a possibility of ice on roads and bridges that are not frequently salted and some spots could be slick.

Earlier this week, the long-range wild-guess for Sunday's weather in the Fayetteville - Springdale area was for partly cloudy and colder temperatures but no severe weather (like snow or ice) was expected. The expected highs are in the upper 30's. We planned to fire up a second coffee pot to also have plenty of hot water for tea or hot chocolate.

No excuses needed with weather alerts and I think caution is warranted particularly if you're using less traveled roads. Katy and I will test the roads on the way to early church in Alma. Then I'm going to load up and then make the final decision about 10:45 Sunday morning. I-540 is usually salted if any snow or ice is found. I just hate not to be there to welcome anyone who shows up... but we'll be careful.

As usual, we'll head for AQ's Chicken House in Springdale for lunch if the weather has improved. (Hot chicken and dumplings really go well with a cool day!) 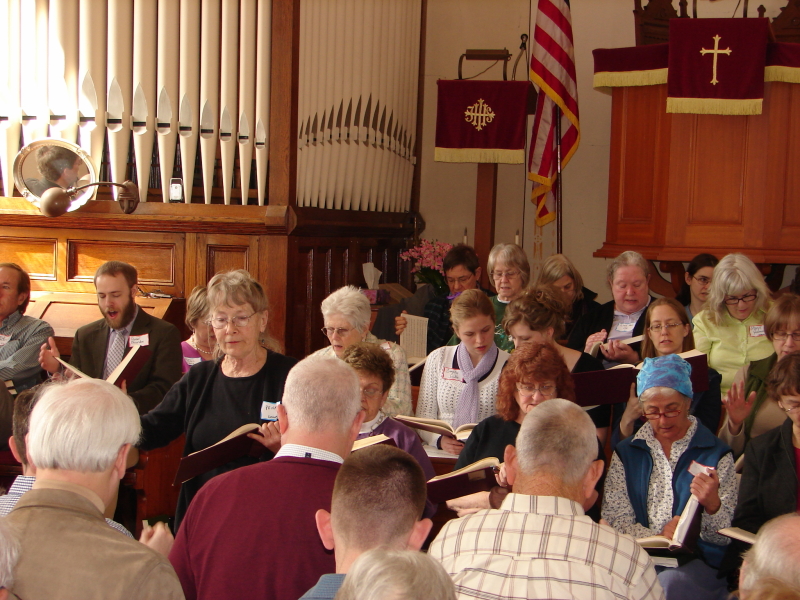 One of the important topics we wanted to discuss was planning for the annual Missouri State Sacred Harp Singing Convention that's held in St. John's United Church of Christ in Pinckney, MO northwest of Washington, MO. The event, hosted each year by the St. Louis Shape Note Singers, is held on the 2nd Sunday in March and the Saturday before, which will be March 9 and 10, 2013, Last year, nine Shiloh Singers were able to join an estimated 140 singers from as far away as Wisconsin, Ohio, Alabama and Georgia.

Photo: 2012 Missouri Convention - "It's always fun to sing with a church full of good singers!"

There's no better way to learn to sing Sacred Harp songs than to sing with the supporting voices of over a hundred dedicated singers from all over the region. Or you can follow my example by sitting next to an experienced singer and trying to follow their lead as closely as you can. They'll figure out that you're trying to learn. After two days of singing, you'll return home a little hoarse but a much more experienced Sacred Harp singer. Hopefully, we'll have some extra car space to share for those who are new singers or who don't want to drive that distance. I'll send out more detailed information on the schedule and accommodations as soon as it's received.

If you're in the Springdale area on Saturday, January 12, 2013, from 10 A.M. until 2 P.M. the Shiloh Museum is sponsoring their annual Cabin Fever Reliever. The event features "Collectors Edition" displays by local NW Arkansas collectors. While you're there, check out the "Single Pens, Saddlebags and Dogtrots" exhibit featuring photos of log buildings in the Arkansas Ozarks.

We certainly hope you'll be singing with us this year and hope to see you Sunday afternoon if the weather clears. We'll warm up the Country Store with good songs and good fellowship.
Posted by BR549 at 6:30 PM