First of all, the regular Sunday, February 9, 2014, singing is still scheduled for 1:30 until 4:00 P.M. in the General Store on the grounds of the Shiloh Museum of Ozark History. Visitors are always welcome and we'll even loan them a book and they can sing along or just tap their foot and enjoy the music. 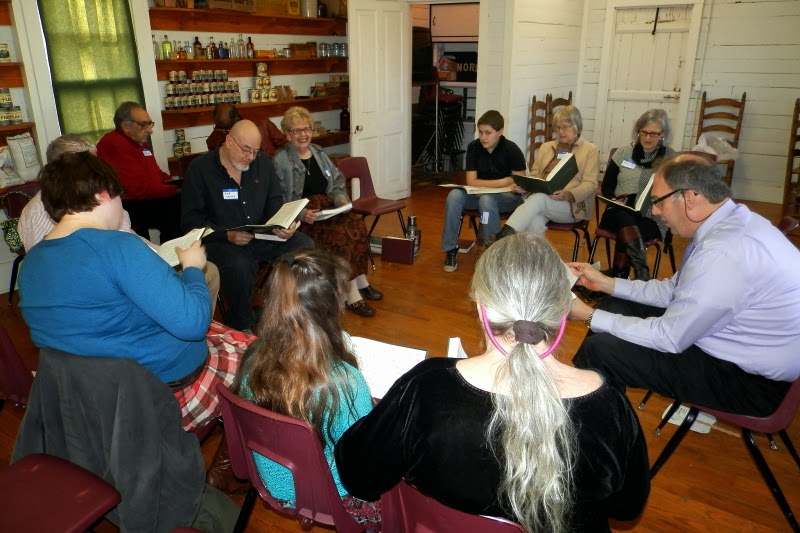 We had a great turnout of singers and visitors in January and Dan Brittain once again covered some of the basics of shape note singing for the visitors. Several of the visitors went home with new songbooks and I think it's safe to say that we all enjoyed a pleasant afternoon of singing the old hymns. I sincerely hope that everyone had a good time. So it's time to send out a reminder about the February event.

This is also a good time to remind everyone that the Shiloh Singers will be in recess in March to allow (encourage?) as many singers as possible to attend the Missouri State Sacred Harp Singing Convention at St. John's United Church of Christ near Washington, Missouri on March 8th and 9th. The two-day event, sponsored by the St. Louis Shape Note Singers, draws singers from Alabama to Wisconsin and is certainly a premier event. We'll talk more about sharing a ride on Sunday. The Saint Louis group recommends making room reservations as early as possible. Click on the links below for more detailed information in the St. Louis flyer, motel info and map.
Missouri State Singing Convention Flyer
Google map & Motel Information

Two boxes of the new 2013 & 2014 edition of Sacred Harp Singings have arrived. Each annual edition contains the previous year's minutes and the current year's directory of where to find local and regional singings  The books will be available at the February singing. I'm also reminded of "Groundhog Day," the 1993 movie, where Bill Murray, the TV weatherman, finds himself living the same day over and over again? Writing a monthly newsletter is a little like the time warp depicted in the movie. And much like the weatherman, once again we're confronted with conflicting weather forecasts. This year, Pennsylvania's Punxsutawney Phil predicted six more weeks of winter.

I also read that somewhere in Arkansas, a groundhog emerged while still blinking his eyes and trying to go back to sleep. He or she didn't actually see their shadow. Thus the groundhog joined the ever optimistic local Chamber of Commerce members in hoping for an early spring.

I hope all the Arkansas groundhogs stay warm toward the end of this week. Accuweather is predicting partly sunny conditions on Friday, possible snow on Saturday, and sunshine on Sunday with the temperatures in the 30's. The local forecasters on KFSM believe it will snow on Friday, clearing with a 30% possibility of snow on Saturday, and turn partly sunny on Sunday with highs in the mid to low 30's. Our best advice is for everyone to watch their favorite news and weather program on Saturday. If the roads get so bad that it's difficult to pick up the key to the general store, we'll post a 2nd weather update so please check this website for the latest information.

One more thing:  The usual invitations for chicken and dumplings at AQ's Chicken House in Springdale around noon and hot chocolate at the Springdale Denny's after the singing are extended. Both sessions are intended to allow more time to visit and talk about singing and sometimes each others grandchildren.

So we'll pray for good weather and hope the to see you and everyone at the February 9th singing.